On our first day in Lisbon we got to our hotel, got rid of our suitcases and after a quick lunch decided to make Tram 28 our first adventure in the city. We spotted the yellow trams in the city streets and easily found a tram stop.

Tram 28 is one of three traditional tram lines that still operate in Lisbon. It winds its way through the old town and takes you past many of the city’s famous and interesting sights and across four of the seven hills upon which the city is built.

We have trams in our city and ride them often but they are nothing like these vintage beauties. All wooden inside and just stunning, you enter at the front and exit at the rear. Sounds easy but it is no mean feat when they are completely packed.

We joined the mega line at the tram stop and (some of us) waited patiently to get on. Son did not fit into that category.

A couple of trams passed us by, full up to capacity they obviously could not squeeze one more person on board and did not even bother to stop and try. Eventually one tram (still packed) did stop and we all crammed onto it.

We bought Via Viagem unlimited 24 hour passes which cost 6 Euro and included all trams, buses and the metro. You could though buy a ticket for this tram from the driver. 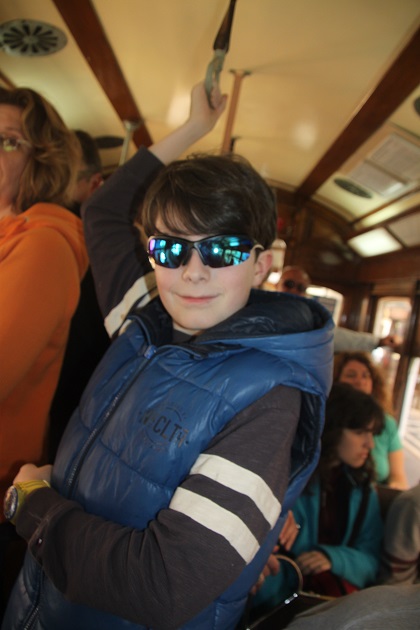 Getting on was a bit of an experience. Everyone lined up in an orderly fashion, until that is the tram arrived. Then masses of people descended from all directions and elbowed you out of the way. Son sussed it all out pretty quickly and became a dab hand at the pushing and shoving thing – we just followed him.

Lots of signs inside warning of pickpockets meant we held on tightly to our belongings. A couple of stops later most people actually got off, we finally managed to snag seats and started to be able to appreciate the views.

The tram ride was noisy, hilly and hectic but gave us beautiful glimpses of the city and was lots of fun. The bell rang a lot to alert people and traffic to the tram’s presence and there were frequent stops.

We rattled and clanked our way up and down the hills – at breakneck speed sometimes. It felt a little like a rollercoaster as we zoomed through the narrowest of streets.

Our driver added a bit of extra excitement into the mix by frequently yelling and shouting abuse at cars getting in the way – sometimes this got more than a little heated. He did the same with pedestrians and people on the street too. I can safely say there was not a dull moment on Tram 28 and this is most definitely a unique experience. 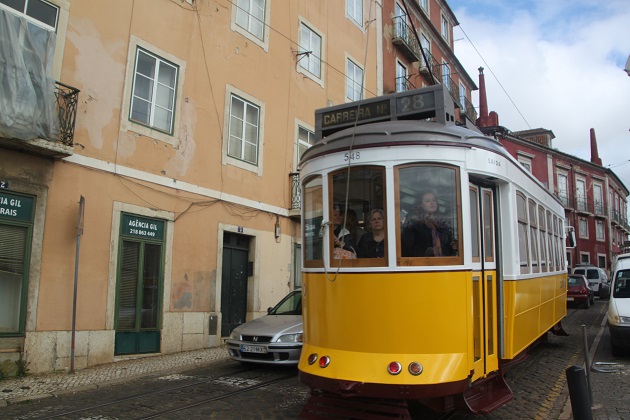 Getting off the tram was quite the achievement too – we discovered it is necessary to elbow your way to the back and jump out pretty promptly. The driver does not hang around. An adventure for sure and a Lisbon must.