Son had been to see Matilda on a school trip a couple of years ago and came back raving about it. Last year as part of his Christmas present he got a ticket to Charlie and the Chocolate Factory. That was a big success, this year we decided to do the same thing and get Matilda tickets. Excitement built and eventually it was time to head to London for the weekend.

All Roald Dahl fans will know the story of Matilda Wormwood, a child with an incredible talent for learning. Despite her terrible parents she excels and is a prodigy. The story is given the musical treatment with the combined talents of Tim Minchin and the Royal Shakespeare Company.

The show has already won a series of Olivier Awards and has been going for a few years. Some people say it is the best new British musical since Billy Elliot – don’t know about that, Charlie was great too but this is very different and we all loved it.

We left our hotel at County Hall and decided to walk to Covent Garden first. I adore walking around any big city, London is no different and in the evening it was buzzing with great views all round.

We dined at Fire and Stone, a lovely pizza restaurant with the most eclectic range of pizza toppings named after different cities around the world. Thumbs up all round and everyone was happy with their choice.

A short walk to the Cambridge Theatre and we were ready for the show. This is one of the “youngest” theatres in the West End, it opened in 1930 and I was surprised at how small and intimate it felt. We sat in the stalls, all seats in this area seemed to have a great view and a feeling of being close to the stage and the action.

The set is just wonderful – lots of building blocks and ascending bookcases which go right into the auditorium. 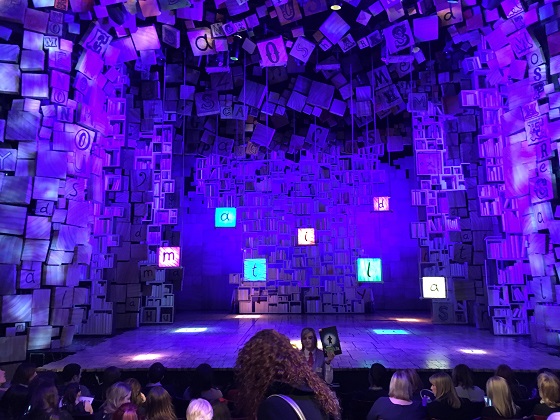 The show begins with a chorus of children singing the most catchy song “Miracle.” The music is just terrific, great melodies and super clever lyrics. We all had different favourites but Revolting Children, When I Grow Up and the ABC song with its catchy use of letters were our highlights.

The choreography was superb, all the children in the show are so talented with their singing, dancing and acting. Son was more than thrilled with the eye popping illusions – a piece of chalk writes itself across the blackboard and the headmistress swings a child around by her pigtails. Some lasers at the end are also a real visual surprise and treat.

We just loved the whole show and sat wide eyed and engaged throughout. There was a mixture of adults and children in the audience, all were transfixed. This is a cracker of a show, I would definitely go to see it again. 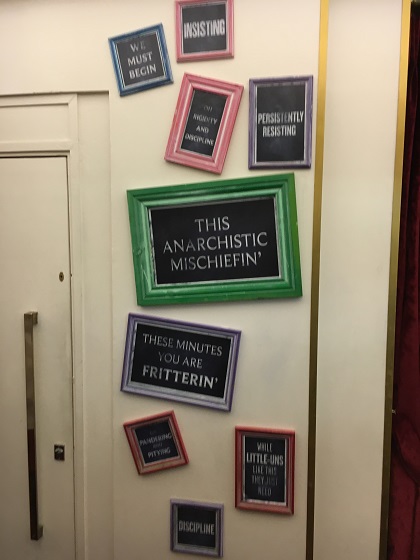 We headed back to our hotel with those songs buzzing around in our heads and got one last great London view before bed.

44 thoughts on “Matilda The Musical”