This attraction starring that famous ogre and his friends has been open in London for quite some time now. Son read about it then, remembered it now and when we organised this weekend trip to London he lobbied heavily to include it on our agenda.

Our abode of choice on this expedition was the Premier Inn at County Hall. That worked for Shrek too – the attraction is in the same building and just around the corner so win win all round. We left our luggage in the room, had a quick stroll and a bite to eat along the Southbank then it was time to meet Shrek and the gang. 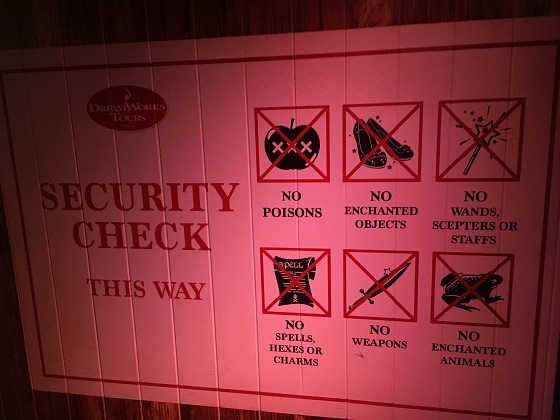 Booked slots are available throughout the day, I would absolutely recommend booking in advance to save (extra) queuing. On a wintery Saturday afternoon in January the place was seriously busy. Even with our advance tickets we still had to queue to actually get in, I was more than pleased we didn’t need to to line up to buy the tickets as well. They are a little cheaper on line too, we opted for a 3pm slot which for some reason seemed to be the cheapest that day – no idea why.

We stood in line for about half an hour before our group of about 40 were allowed to proceed. That was a pain, I was getting grouchy with all that hanging around but eventually we were in. They call it an immersive storytelling experience but before everything kicks off they take photos in front of a giant green screen – no pictures allowed during the tour unfortunately.

We were ushered into a big waiting area and an actor explained the “rules” before shepherding us into a room with Princess Fiona. A bit more storytelling about the Land of Far Far Away and then we were herded onto a red London bus. 3D glasses on and we were off – great fun, there was a 360 degree screen and although the bus itself barely moves you feel as if you are flying with the screens all around. First we flew above London then whizzed through some DreamWorks film scenes. All great fun but just a bit too short…

We were led through a “forest” and met a whole series of fairytale characters. Cinderella first, a fortune teller next – each meeting involves the audience joining in, this is not for shrinking violets. Son and I were beside ourselves when the fortune teller took Husband up to the front claiming he was a “trained dancer.” She must have been able to sniff his horror, needless to say we loved that and watching him squirm and then dance.

We passed through a whole series of entertaining scenes like that. Wheel of Torture with Pinocchio was entertaining, a pub run by Cinderella’s Ugly Sister and then a cell with a witch were our highlights. We loved it all but some small children were completely freaked out. It is dark, quite spooky and a bit grim in parts. The humour was excellent, aimed at both adults and children and we thoroughly enjoyed the whole experience. Great actors, plenty of atmosphere, good effects and fantastic theming, it felt like we were taking part in our own pantomime.

At the end we passed through a mirror maze and escaped to safety. Shrek was waiting and in this area you were allowed to take your own pictures. Lots of other scenes from Madagascar, Kung Fu Panda and How To Train Your Dragon made for some good photo opportunities.

They showed us those first green screen photos in a quirky Shrek album. We usually avoid that stuff but thought this was different and unusual and ended up buying it. We managed to avoid any further purchases in the gift shop before heading outside. 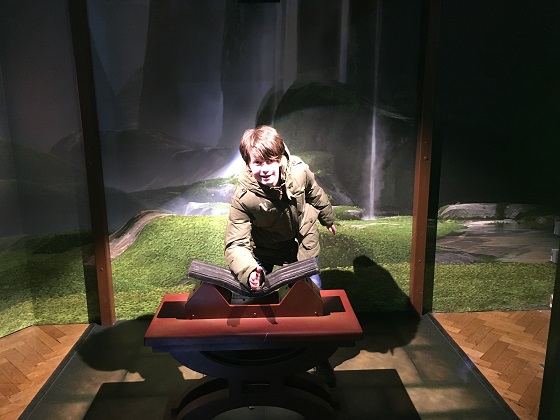 The whole experience took about 75 minutes and was just great. I was pleasantly surprised having read mixed reviews. Lots of people loved the bus ride and weren’t so impressed after that. The ride was fun but for me the scenes with the actors and different characters were the highlight – different, engaging and an all round fun experience.