Our last day in Wicklow, we got up early and took the half hour drive from our hotel to Glendalough. Eagerly anticipated by all of us, this one time lonely place has become one of Ireland’s most popular monastic sites and we’d read and heard so much about it. It was the retreat of St Kevin and is one of the most important early Christian sites. Impressive enough to start with but then there’s the setting and the scenery – they are simply stunning. Glendalough literally means “Valley of the Two Lakes” and is in a wooded valley between two tranquil lakes – breath-taking from first glance. 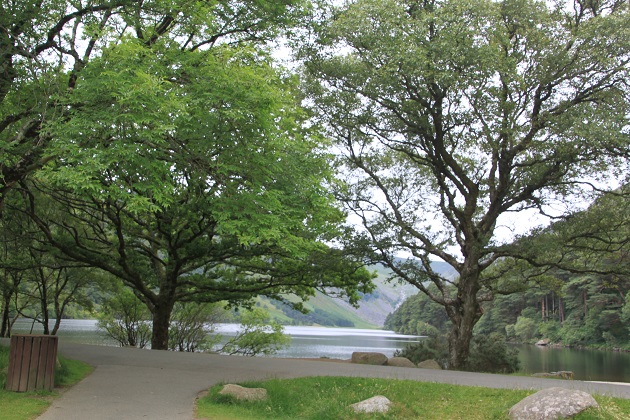 We struggled a bit to find the place and then the car park, signs were a bit thin on the ground but we persevered. A lady at our hotel recommended parking at the upper lake, we took this advice and it worked well. The lower lake car park was packed, people everywhere milling around but we had the opposite experience. Just a few cars, hardly any people and the upper lake was an oasis of tranquility and calm. We paid a small fee to park here (parking at the lower lake was free) but it was most definitely worth it. 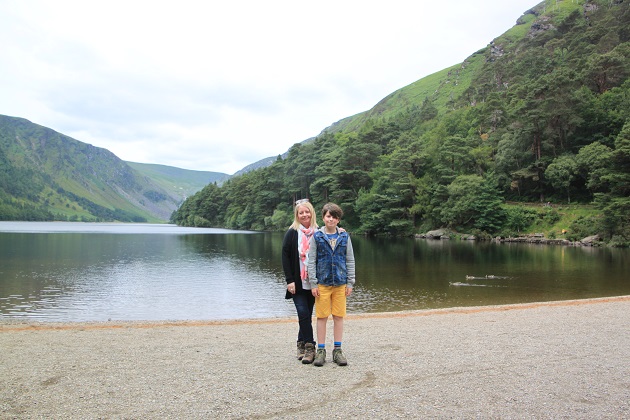 It’s just a very short walk from the car park to the upper lake. We had it all to ourselves, apart from a duck family with some cute ducklings – Son was, needless to say, most taken with them. We were most taken with the view – this place is special, so calm and so peaceful I could have sat here and taken in those views all day. That wasn’t to be – our energetic boy was happy to mooch around for a little while but was soon keen to get going. We strolled along the lake until we came to a little house.

Inside there were no end of maps, guided trails and a host of stuffed animals. All had died of natural causes or in an accident, none were killed for stuffing (phew) but it was interesting to see up close, even if they were no longer with us, a sample of the local wildlife. Son was also very intrigued by the Bat Cam. A colony of bats live in the attic, they have infra-red cameras up there and show live feeds on a screen downstairs, not much happening when we were there – very sleepy bats – but it was interesting nonetheless. 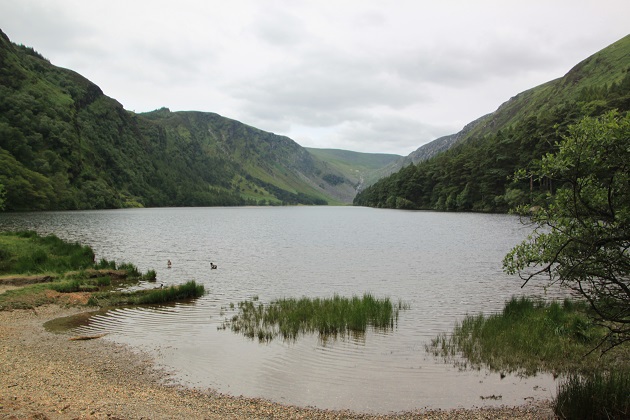 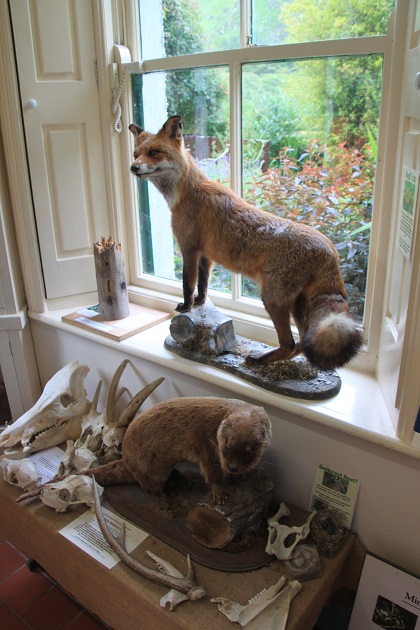 We carried on through some gorgeous woodland along a mainly flat and well maintained path to the lower lake. It took just about twenty minutes, no complaints from Son about the walk so success all round. There was plenty of wide open space for him to run free, a babbling brook was a highlight for me. There are so many walks and trails around this whole area, some take you further through the woods, some take you beyond the lake and we saw some challenging hikes which take up most of the day. I would have liked to try one of these out, time constraints though meant we just walked to the lower lake and those incredible ruins. 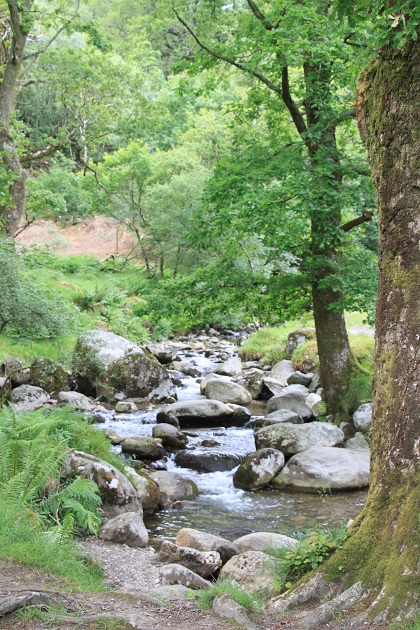 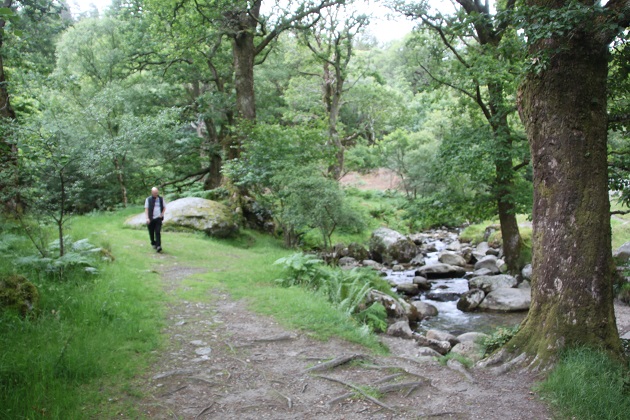 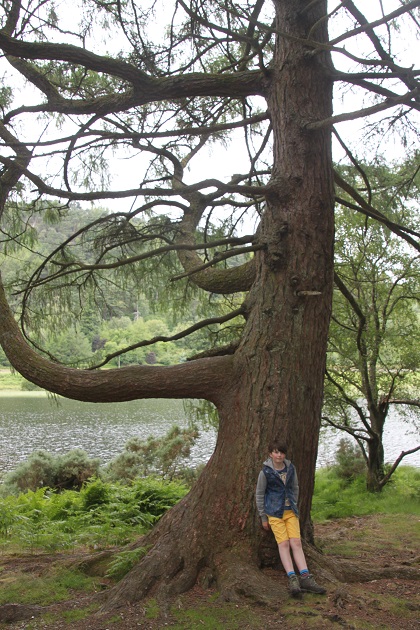 Getting closer to the lower lake we saw the famous tower and church in the distance. Closer still we found we no longer had the place to ourselves, crowds of people just about everywhere – what a contrast. We made our way to the visitor centre fully intending to check out their exhibition and audio visual presentation about the site and its history. We queued up at the desk, money at the ready but the lady there put us off. She suggested we should take a free leaflet and go see the ruins first. Then (her words) if we “really wanted to” we could come back and see the film later. Seemed like they sell this all a little short really, this was their approach with other visitors in the line behind us but I have to say, it did work out for us and we never did go back to see that film. 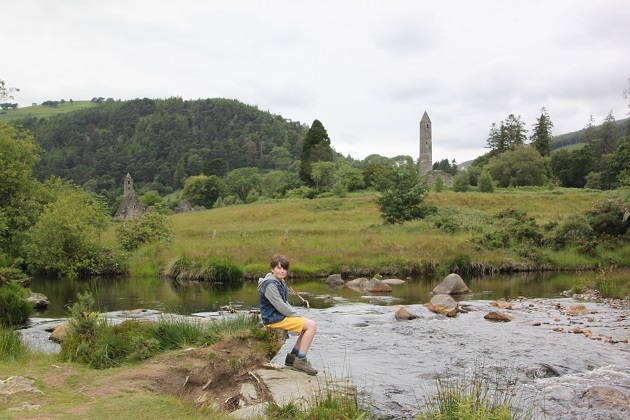 We made our way to the monastic site, very close to the Visitor Centre, past the huge numbers of tour buses, people gathering for guided tours and students generally milling around. Bustling and busy and just as far from the peace and serenity of the upper lake as you could get. 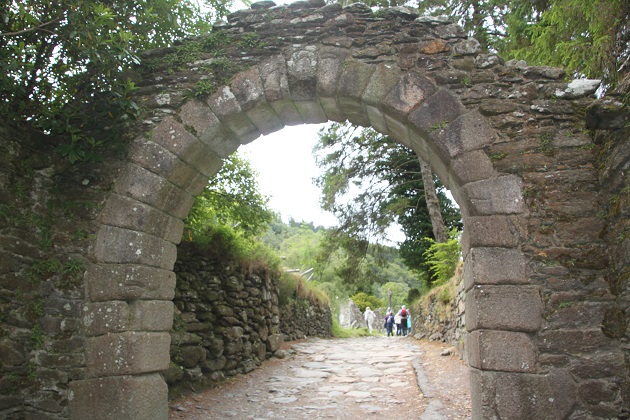 At the entrance to the ruins was a lady playing some sort of traditional Irish instrument and singing. Husband and I lingered a while and listened. Son had spied out a host of ice-cream vans along the road and decided a giant chocolate cone was required before exploring any further. 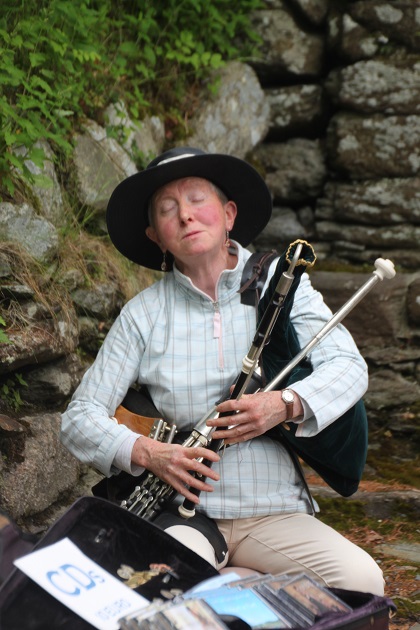 Despite the large numbers of people this still feels like a special place with a special atmosphere. It was founded by St Kevin in the 6th century and the “Monastic City” developed from that. There are a number of monastic remains to see, the Round Tower was our favourite. It stands 30 metres high, Son was most intrigued by where the door was. We discovered it was an opening quite high up in the tower. Those monks had the nifty idea that they would use a ladder to get through the door then this was hauled in and the door slammed – they weren’t bothered by too many intruders. 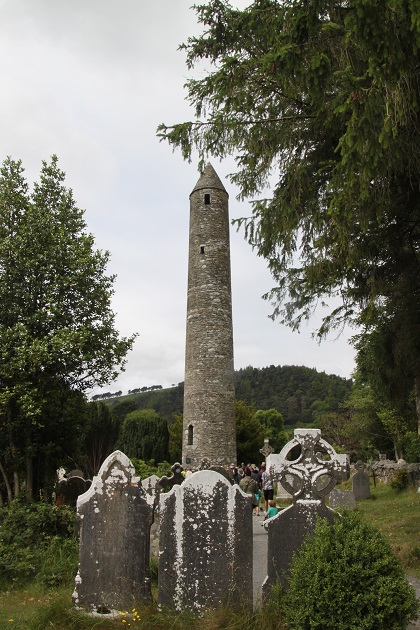 We had a look at St Kevin’s Church, commonly known as St Kevin’s Kitchen and the cemetery. 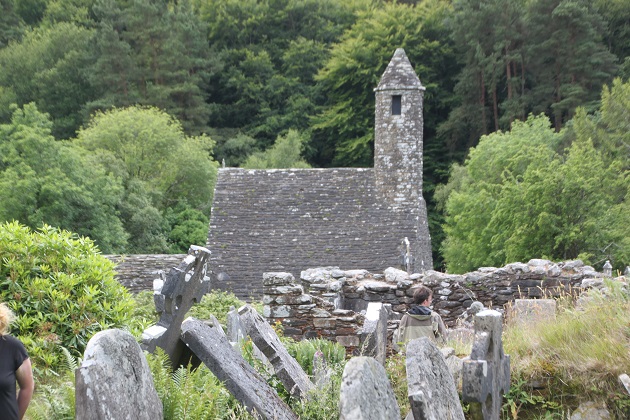 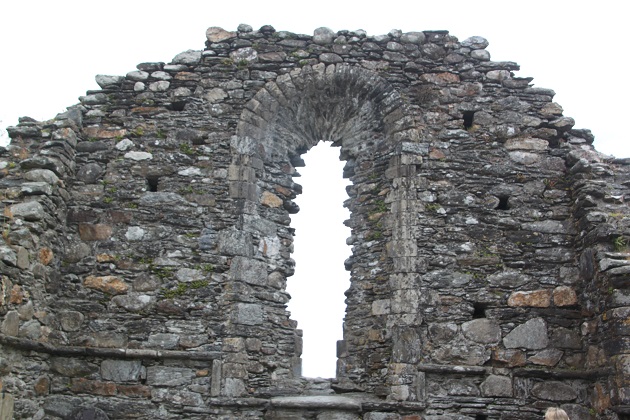 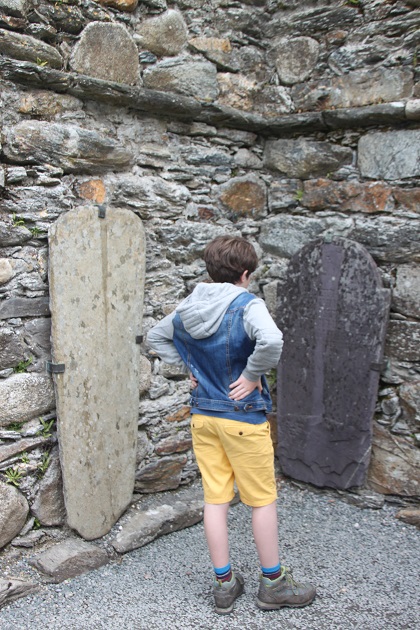 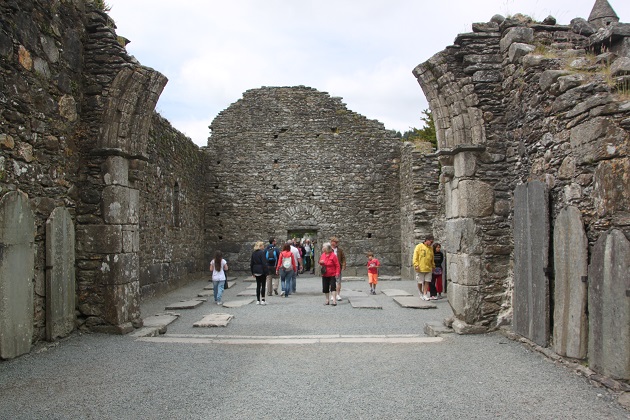 Afterwards we took the boardwalk back to the upper lake. A wonderful natural setting and a slightly different perspective on the lake as we viewed it from the other side. 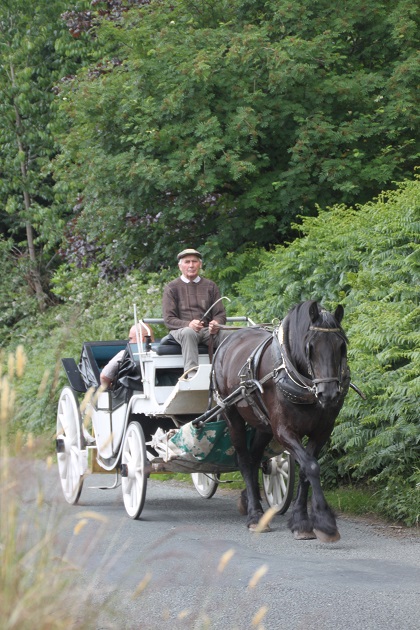 We spent just over four hours here – history and nature at its finest.