Choosing a break for Son’s half-term holiday usually involves the pot luck approach. We check out the budget airlines to see where the most reasonably priced flights would take us, make a list and then select. We found some cheap flights to Nice and opted for that – mainly because Son really fancied the idea of staying in Cannes. No great intellectual reason, it was all down to Mr Bean. Having watched Mr Bean’s Holiday where the aforementioned disaster prone character had an eventful trip to the south of France in time for the Cannes film festival, this really appealed to Son so the decision was made. 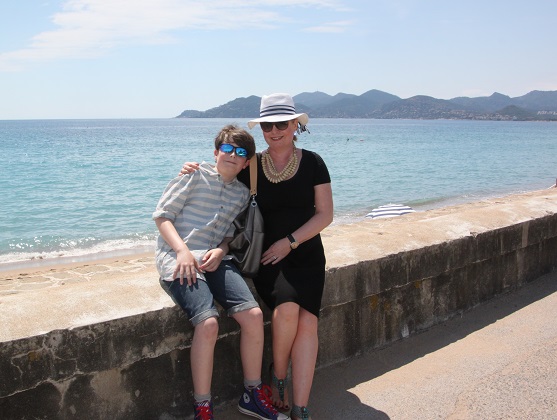 Thankfully our arrival in Cannes was uneventful and bore no resemblance to Mr Bean’s journey. We flew to Nice airport, had an easy thirty minutes drive to our accommodation and arrived without incident. What we did have in common with Mr Bean was the Cannes Film Festival. We arrived on the second to last day and managed to experience the tail end of the glitz, glamour and frenzied activity that takes over this town when that festival is going on. 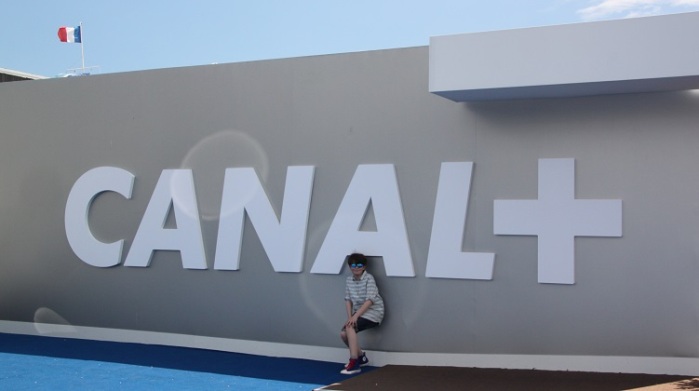 Each May Cannes becomes a melting pot of movie stars, film makers and wannabees plus the old billionaire who all come to town for the 12 day film festival. It attracts the stars but also a serious number of photographers. The buzz is incredible and the people watching is something else. We had a stroll by the harbour first of all and admired the yachts in the Vieux Port – plenty of excess on show.

The Palais des Festivals is just around the corner from the harbour – host of the film festival but not particularly attractive from the outside, we saw the red carpet rolled out and waiting for the last night of the festival. Apparently you can take tours, tread the stage and walk down the auditorium – just not when we were there. Plenty of suited security men keeping an eye on things and even at 2pm in the afternoon crowds of people pitching their front row spots for star watching. Son was amazed too at the number of stepladders all lined up and paparazzi with huge cameras getting ready for the evening’s activities. 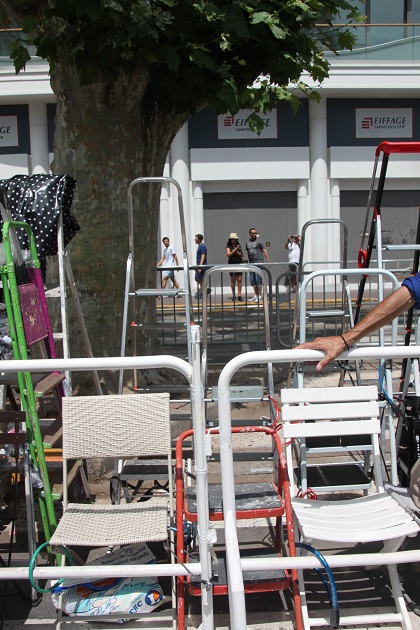 We just contented ourselves with posing for pictures near the 22 steps leading to the entrance – early in the day you could get close, by 5pm there was no chance.

We wandered down Allee des Etoiles du Cinema where we ran into Sharon Stone and the Pink Panther and other icons of the silver screen – well at least their handprints and signatures in the pavement. 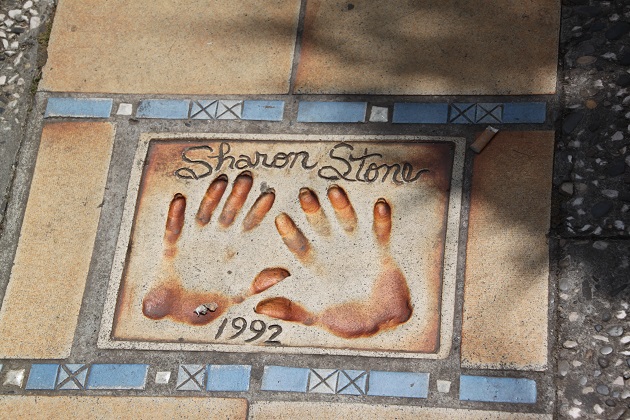 A walk down the Croisette – the glamorous seaside promenade is a must do. This is the most famous street in Cannes, it curves along the coast and is lined by grand hotels and exclusive private beach clubs. The palm shaded promenade was a hive of activity – the Art Deco and Belle Epoque hotels are impressive but so too are the views of the lovely bay and the mountains. All the way down the Croisette at some of the swanky hotels people had also gathered round the entrances, kept behind ropes but straining to catch a glimpse of a movie star. 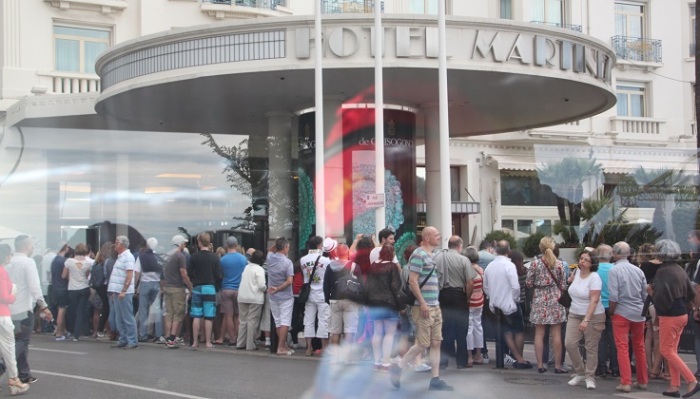 We strolled taking it all in, had a rest in the lovely rose garden at the end then walked back to the Palais des Festivals where everyone’s attention was gathered that evening. On the way past the Festival Hall we saw huge crowds and couldn’t even get close. Still, at least we’d experienced the fringes of the Cannes glamour for the film festival.