There’s an old Liverpool folk song which says, “If you want a Cathedral We’ve Got One To Spare,” and they certainly do – two cathedrals, one Anglican and the other Roman Catholic sitting either end of Hope Street. We had visited and explored the Anglican Cathedral earlier in the year but ran out of time to see the second one. A trip back to Liverpool was in order to put this right.

We parked at the Anglican Cathedral and set off down Hope Street. On a street corner by Mount Street Son was most intrigued to spot what looked like a big pile of discarded luggage. These suitcases are actually made of concrete and called “A Case History.” One case has Paul McCartney’s name on there, other famous Liverpudlians with connections to the area are featured too.

We couldn’t walk past the incredibly beautiful Philharmonic Pub – so gorgeous inside and out with tiled floors, an incredible ceiling and so many nooks and crannies. Son was fascinated by the two lounges inside called Brahms and Liszt – clever naming with the philharmonic connection and a bit of Cockney rhyming slang.

Half a mile away from the Anglican Cathedral and we arrived at the Metropolitan Cathedral of Christ the King to give it the full and correct title. A unusual looking building to say the least, apparently locals have been known to call it the Mersey Funnel or Paddy’s Wigwam – not hard to see how they came up with these!

The cathedral was built for the Irish immigrant community in particular. After the Potato Famine in the 1800’s in Ireland around 2 million immigrants came to Liverpool and by 1851 a quarter of the city’s population was of Irish descent. They brought their strong Catholic faith and plans were eventually drawn up to build a cathedral but it didn’t happen for a long time. The original design was meant to be similar to the Anglican Cathedral, however they only built the crypt in that way. World War II came along and that, together with rising costs meant the design was abandoned.

At the end of WWII architects from all over the world were invited to compete and design a new cathedral which was to cost around £1 million and be complete in 5 years. The original was estimated to cost over £27 million. The competition was won by Sir Fredderick Gibberd, they started work in 1967 and completed this church which can seat more than 2,000 people. The building is circular and concrete, not sure if I love it but it certainly stands out and you wouldn’t forget it in a hurry. We stepped inside and found the modern theme continuing with lots of modern artwork and some glorious multi-coloured windows. It’s very light, bright and airy inside and apparently on a sunny day those stained glass windows are amazing. The sun did not bless us with its presence that day…

There is a glass lantern above the altar rising to a height of 290 feet – spectacular. The altar is made of Macedonian white marble, we noticed the unusual metal structure above it – apparently a special type of canopy that protects and highlights the altar. 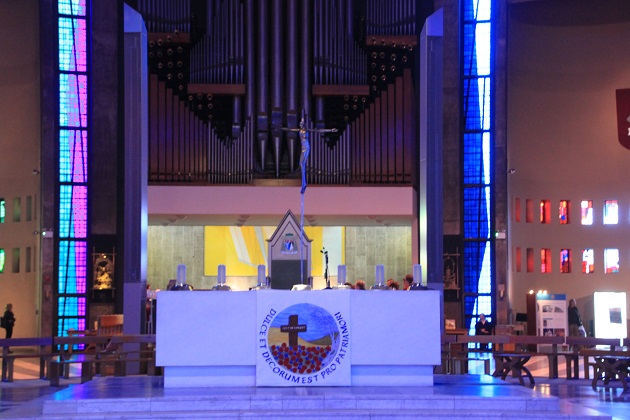 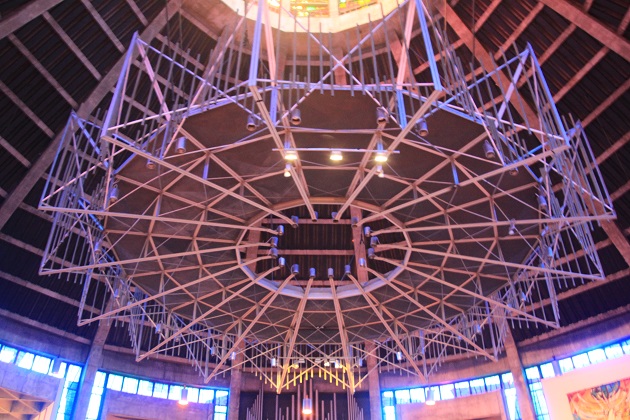 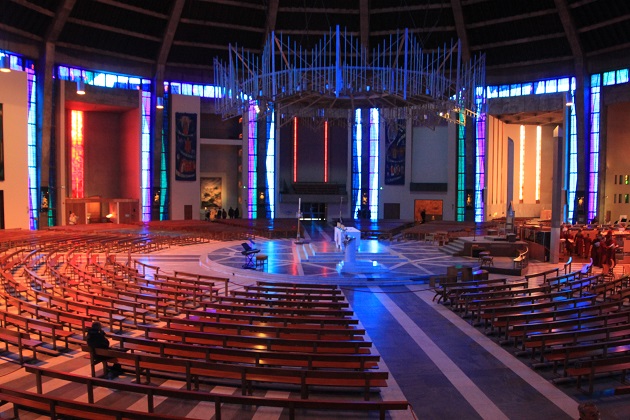 A leaflet from the entrance highlighted the main points of interest and different chapels. We wandered around the giant circular building and just soaked up the atmosphere.

41 thoughts on “Cathedral Exploring in Liverpool”