Santa was not the only reason for this Lapland trip, he was however the main one. We figured that Son, at 6 was the perfect age for this journey beyond the Arctic Circle – still a firm believer in the man with the red suit but also (hopefully) old enough to retain plenty of memories of this special holiday. Time proved us right on the latter. We planned plenty of snowy activities but also made sure to organise a couple of meetings with Santa. This one at his secret hideaway deep in a forest sounded just perfect.

We never normally book tours or take a holiday with a tour operator, we broke both rules here. I was sold on the description in the brochure of seeing the “real” Santa in his log cabin hideaway, we booked and paid for this before we even left the UK.

The much anticipated day arrived, we were collected by coach from our hotel in the icy darkness – it was 3.15 pm. A fifteen minute drive out of Levi and into the countryside but not much to see en route. We clambered off the coach and had a walk up a long track at the end of which we were greeted by an elf. She led us up a path lit either side by flickering candles, the magic was starting. Son was spellbound and despite the fairly long trek in some seriously cold conditions, he never uttered so much as a word of complaint – highly unusual. Not sure I was as good as that – the cold was getting to me.

We reached a log cabin set amongst the trees, everyone rushed indoors to warm up by the blazing fire. Flasks of coffee and hot berry juice together with gingerbread cookies hit the spot. A few more elves were inside and they led the group in a sing-song including Rudolph The Red Nosed Reindeer, during which Santa made his appearance. Large, round, jolly every child and quite a few adults were wide eyed with awe. He stayed for about five minutes then left promising he would see us all later. The children were encouraged to draw and colour pictures, there were wooden jigsaw puzzles and a craft area where you could make a Santa head from wood and cotton wool. Son’s effort has survived to this day, it comes out every year with the Christmas decorations and takes pride of place on the fireplace. 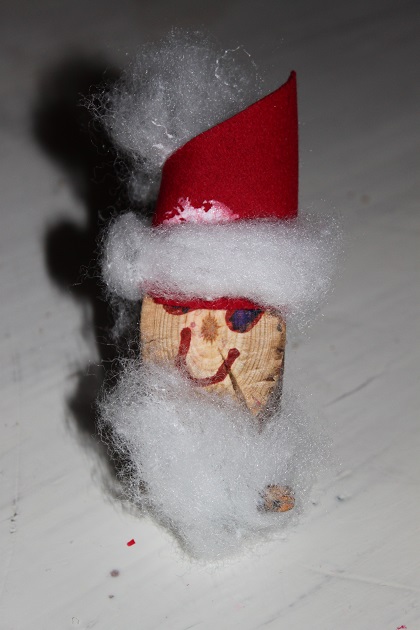 While all this was going on, the tour rep took each family in turn to meet Santa in his special log cabin. First slight bit of pique here from me, I recognise doing this day in and day out is more than a bit boring, our rep however didn’t try to hide these feelings one little bit. The whole thing felt like a production line with the rep intent on getting the job done as quickly as possible. The fact this was a one-off trip of a lifetime experience for most people didn’t seem to have crossed his mind. Son, though, I hasten to add, was blissfully unaware of any of this.

Eventually it was our turn, we stepped inside Santa’s cabin and found the most perfect scene – exactly as you imagine it should be. Beautifully decorated, warm and cosy with the most delicious Christmassy smell and Santa seated in his rocking chair. Son was dumbstruck, barely managing to utter his name, he sat beside Santa and just stared. The experience was priceless. Santa was very nice, not overly chatty though and I think the language barrier probably didn’t help with that. Most families were with him for only a short time, this too was our experience. You could take as many pictures as you wanted, no professional snapper either so no pressure to buy anything. 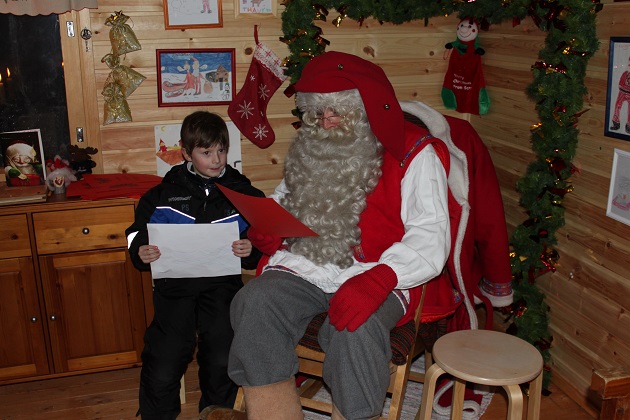 They had a few things to do outside the cabins. We saw a reindeer, played skittles in the snow and tried out some snowshoes. After all that we sat by a blazing fire and cooked sausages.

The whole Santa experience was quite unlike anything we’d ever encountered before in that it was totally uncommercialised. I found that so refreshing. No pressure to buy any extras – there was nothing to buy, we were in the middle of nowhere, this was just wonderful. This brought its own problems though – not least of which there was no running water at the hideway and no toilets – a little tricky. The temperatures were super low and due to the extreme cold you could only venture outside a maximum of ten minutes. It was so incredibly dark with only the light from the fire that I wasn’t entirely happy about being outside anyway – keeping an eye on Son who was inclined to roam was far too tricky. 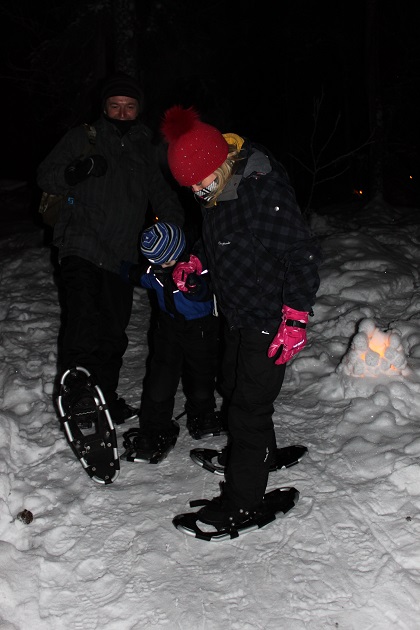 We spent two and a half hours at the hideaway, realistically an hour would have been more than enough. The Santa meeting was wonderful, the activities were fun but for about an hour everyone was crammed into the log cabin just waiting for the coach to come and take us all back to Levi. Eventually it was time, we trudged back down the long path to the bus and then waited while another coach load of people disembarked. Production line and conveyor belt were my thoughts, again this went right over Son’s head.

The Santa experience wasn’t perfect. We had to wait far too long in the middle of nowhere in a place with no loos, however time must have dimmed my bad memories. I only remembered all of this when I read my travel journal. Prior to that I thought of this trip with nostalgia and a rosy glow. It is one of the few travel experiences we’ve had where Son remembers every last detail and still, even though at 12 it’s not cool to “do” Santa, enthuses profusely. That probably says it all, the Santa meeting was a hit, in his memory magical in every way and that’s all that matters.