I’d been to Wales. I’d been to three of the four UK capital cities, but until this summer I’d never been to Cardiff. Husband needed to venture to the south of Wales for work, an opportunity to see Cardiff and a weekend away was on the horizon. It was seized. Top of the list of Cardiff’s attractions, I discovered, is its castle – that was our first stop. We found it easily – the whole of the city centre almost seems to be clustered around the castle walls. Donated to the city in 1947, before that it was the ancestral home of the Bute family. If you are a Cardiff resident entrance is free. If, like us you’re not, the entrance fee is more than reasonable. 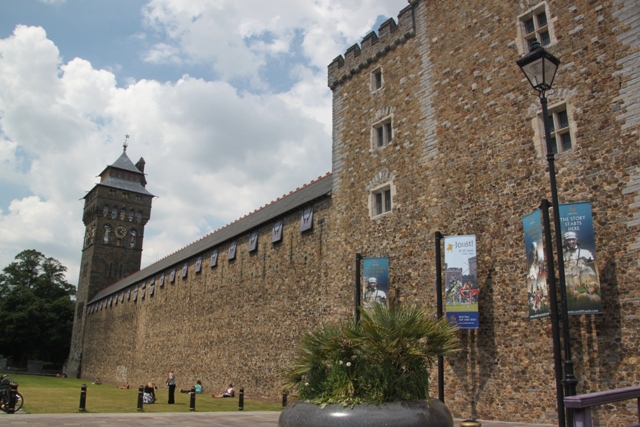 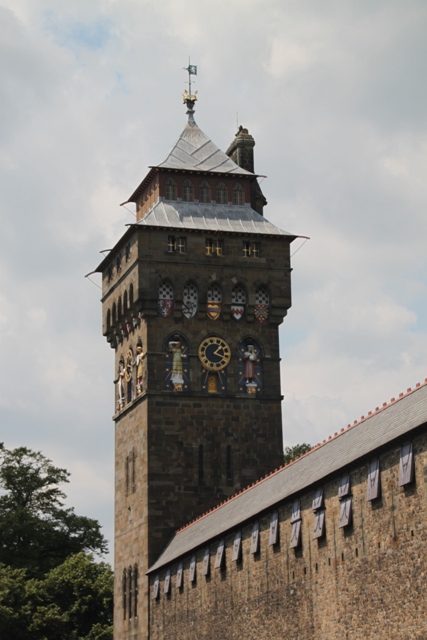 Inside was not what I expected and not how I expected a traditional Welsh castle to look. It is more like a collection of little castles centered around a green area and is spacious and lovely. Two thousand years of history to soak up – from the Norman motte and bailey shell keep built around 1081 to the 13th century Black Tower entrance gate, then there’s the fort where William the Conqueror’s eldest son was imprisoned by his brother and on top of all that the grandest of houses built in the 1420’s and made over by the Marquis of Bute in the 19th century. History galore. 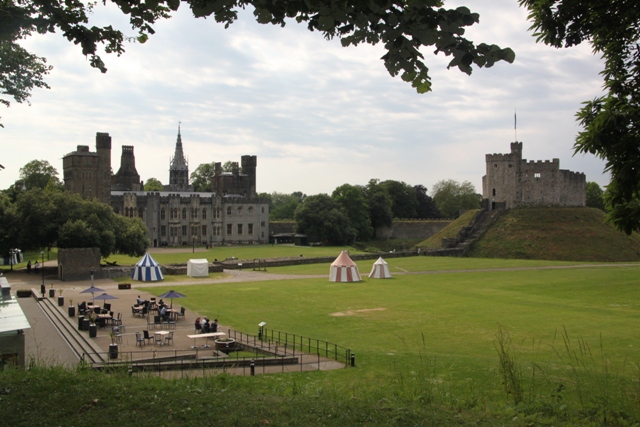 We headed first to “The Firing Line”, a small but well organised and interesting museum about Welsh regiments and soldiers. Most intriguing for me  the Royal Welsh Fusiliers always have a regimental goat!

We watched a film about the castle and its history, bit of a wow moment when the screen lifted up at the end to give a panoramic view over the central area outside. Time then for our guided tour – we paid £3 extra each for this and got a 50 minute guided tour of additional castle rooms you don’t see on the normal entrance ticket. Well worth the small extra charge, this was my castle highlight, our visit would have been incomplete without it. We got to see the living quarters of the third Marquis of Bute, the richest man in the world when he lived here in the 19th century. He lavished a significant sum on the castle and created, with the help of his eccentric architect William Burgess, a wildly flamboyant interior – it has to be seen to be believed. 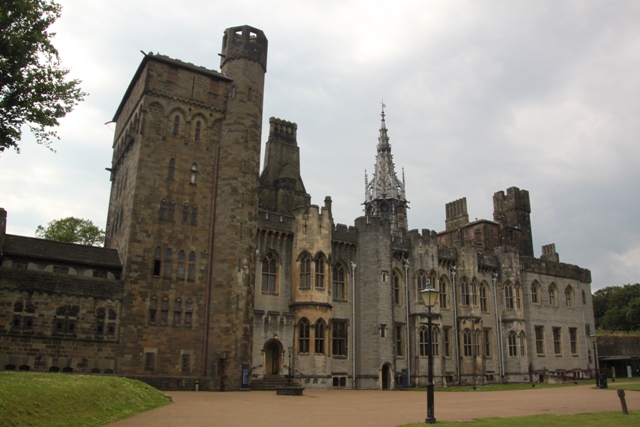 What a treat to wander with our guide through all the rooms – a Gothic fantasy made real. The whole place is stuffed to the rafters with Gothic architecture, religious symbolism and astrology symbols. It also had all the mod cons of the Victorian era – this was the second house in Wales to have electricity and there was running water in the ensuite bathroom. We started in the Winter Smoking Room in the clocktower, saw the Bute children’s nursery with fairy tale paintings covering the walls and entered Lord Bute’s boudoir. How he ever got a wink of sleep in there with all that detail going on in the tiniest bed ever is beyond me. 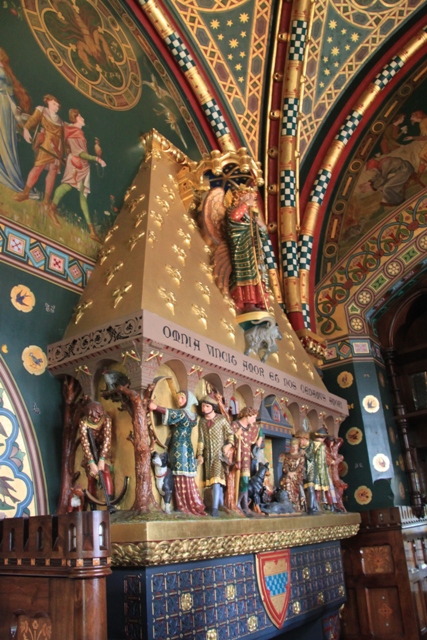 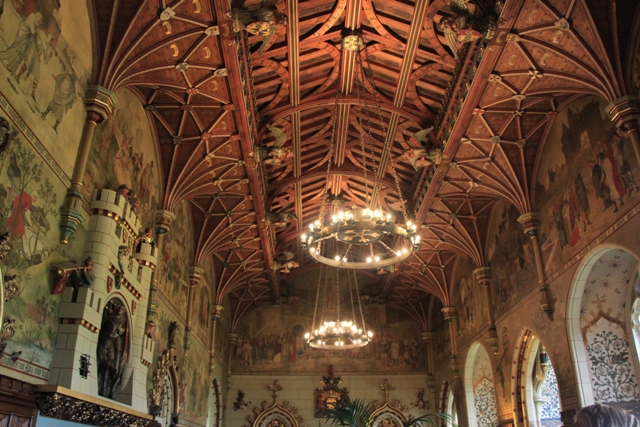 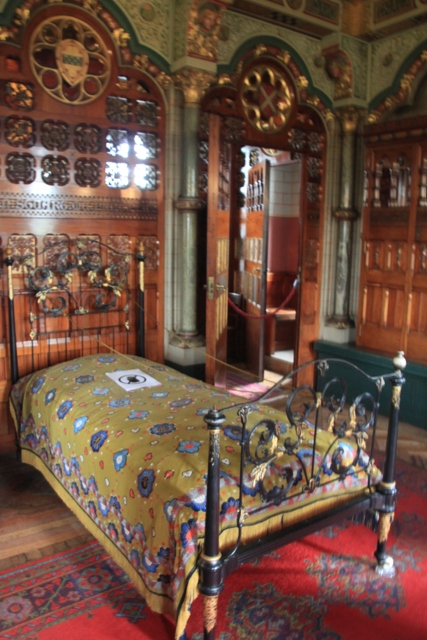 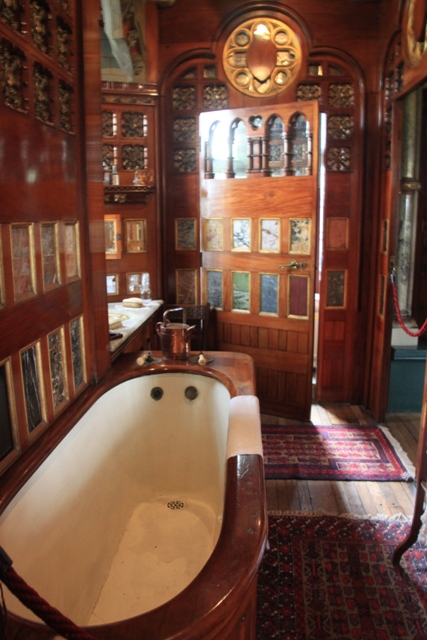 There was a Roman roof garden and the most amazing banqueting hall with heraldic shields, an incredible fireplace and a minstrel’s gallery. This is where royalty and important people are still entertained when they come to Cardiff. 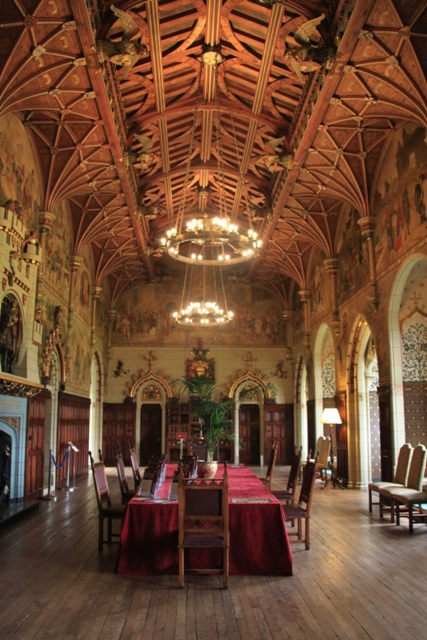 The Bute family’s “small” dining room, used when no guests were visiting, had a table with a hole in the centre – designed so a living vine could be slotted through it, allowing diners to pluck fresh grapes as they ate. 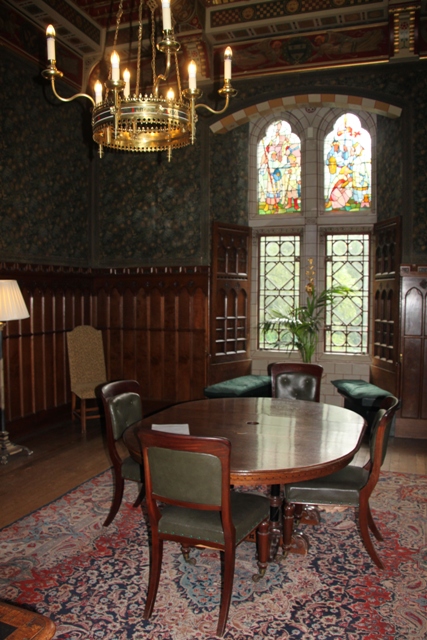 We finished in the incredible library with our tour guide and were encouraged to retrace our steps if we wanted to view the rooms again at our leisure. That we did. Tour complete we went back outside and with our trusty hand-held audio guides explored the grounds. Lovely views, dare I say though that the stadium (home of beloved Welsh rugby) looks like it is right on top of the castle and does not enhance the panorama. 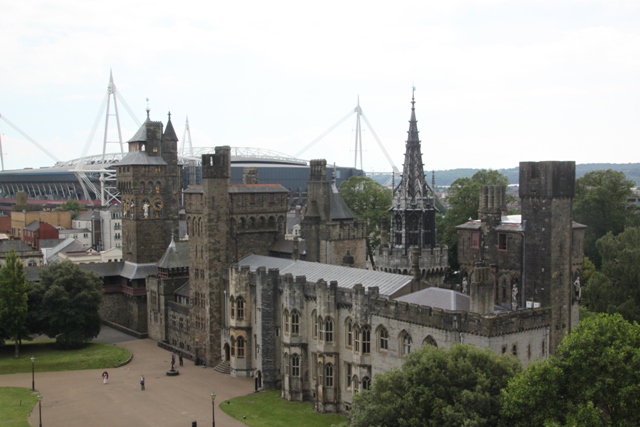 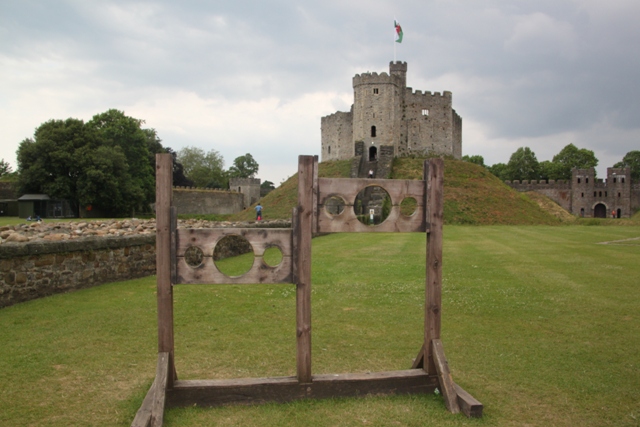 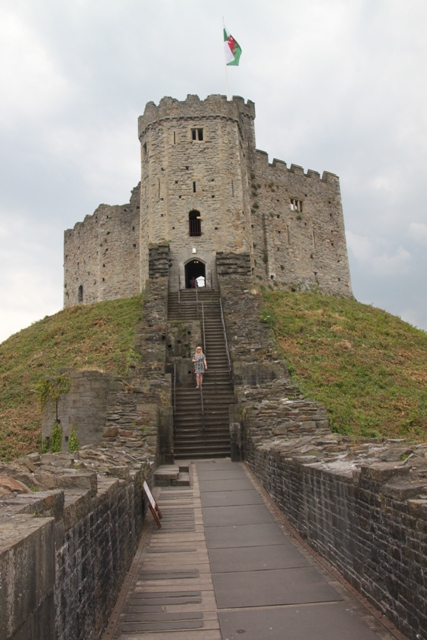 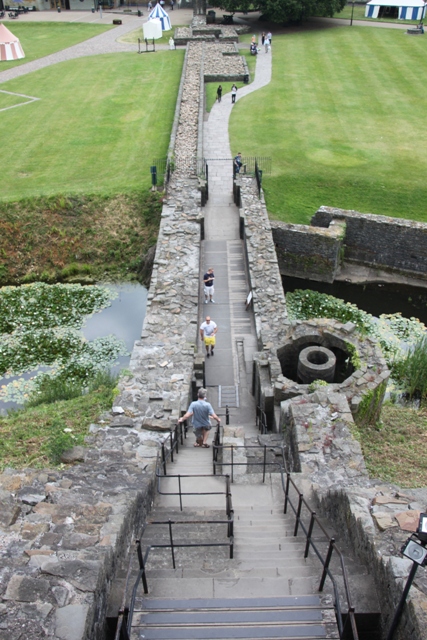 We climbed multiple steps to the keep, walked the walls and found the network of tunnels where, during the air raids of World War II two thousand people from the city were able to take shelter. Sound effects played as we walked through – eerie but incredible. 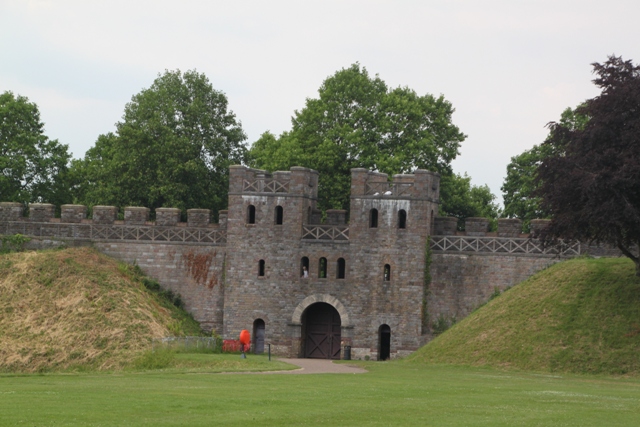 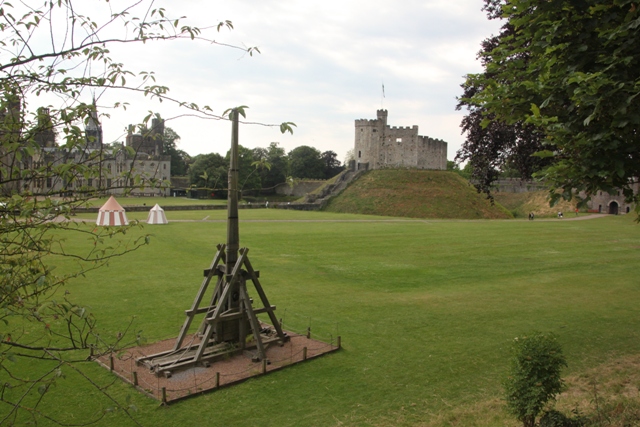 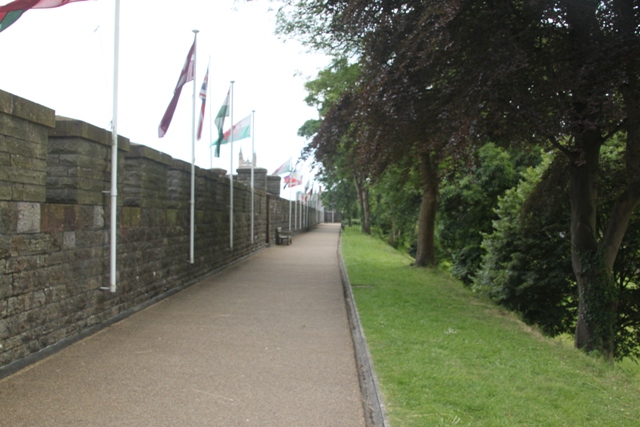 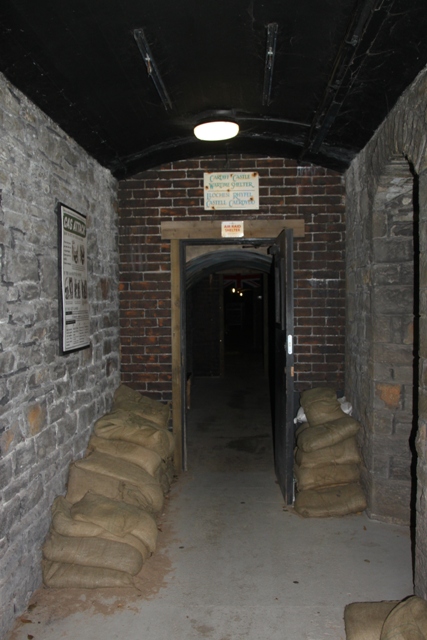 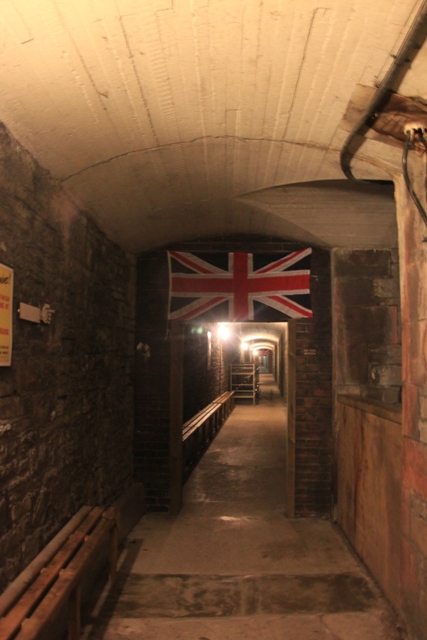 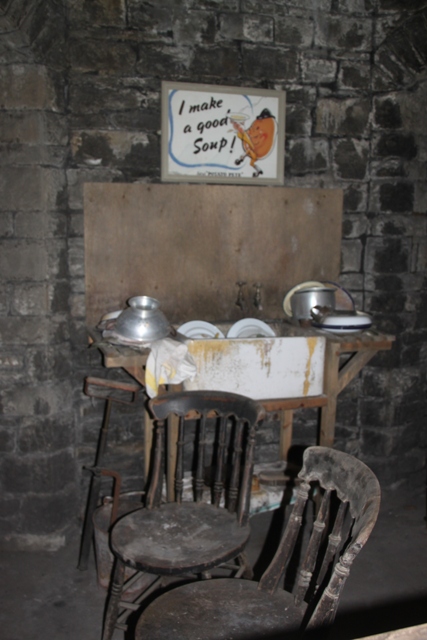 There really is something for everyone here. Stacks of history, the most fabulously flamboyant and lavish castle interior, gorgeous grounds with oodles of space to run around, castle ramparts and to top it all some original air-raid shelters. We were so surprised how much there was to see and do – what a great day out.