Top of our agenda on arrival day in Florence was the Duomo. A vast Tuscan triumph, this iconic building with its brick red cupola dominates the Florence skyline, our goal for the afternoon was to climb to the top and take in the best views in the city. The dome is quite something and goes right back to the 15th century. In those days nobody had ever put such a big dome on a cathedral. Sceptics thought it would fall down, but all credit to the architect. Hundreds of years later this is still the largest masonry dome in the world, hundreds of people climb to the top every day.

The Duomo is a massive Gothic cathedral – it can hold 20,000 people and is apparently the fourth largest cathedral in the world. It was consecrated in 1436 but they started building it in 1296. All very impressive, but it’s the outside of this place that does it for me – a real treat for the eyes with green, white and pink marble, not a bit of anything unadorned, it reminded us of a giant gingerbread house. I’ve never seen a church quite like this.

We were wowed by the outside, inside we were surprised but in a different way. So ornate and fancy is the exterior that the simple and largely unadorned interior really does take your breath away. It is lovely, just a few works of art and otherwise very plain. There are 44 stained glass windows which are beautiful but inside the wow factor belongs to the dome. We got our kicks just standing right underneath and looking up. Son felt it would be a good idea to lie down on the ground and look up, we managed to dissuade him. Words fail me here, it is just breath-taking and the sense of space is something else. We had another of those conversations wondering how workmen in the 15th century with no modern kit ever managed to build such a thing. 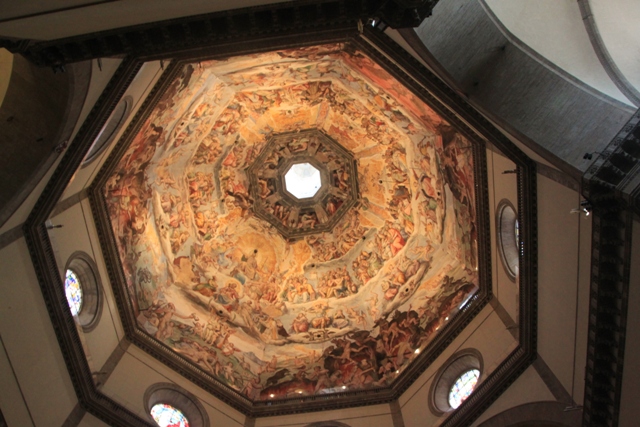 We started the climb. 150 steps and we reached a viewing gallery where you can look out over the inside of the church. Then 120 more steps and we came to a guard controlling the going up and coming down. Next up was the tough part – 170 steps (yes I counted and remember every last one) via a dizzying spiral staircase then two sets of steep stone steps (barely more than ladders), through a smallish hole at the top and we’d made it. This is not for the faint hearted or those with a fear of heights and once you start, you really have to keep going however you feel about that.

Blinking and squinting into the sunlight with legs of jelly, huffing and puffing and sweating it suddenly became apparent why we had put ourselves through the torture. The views are amazing. The city spreads out before you, the hills in the background and you get a real sense of just how massive this cathedral really is. A panorama like never before, it is glorious. 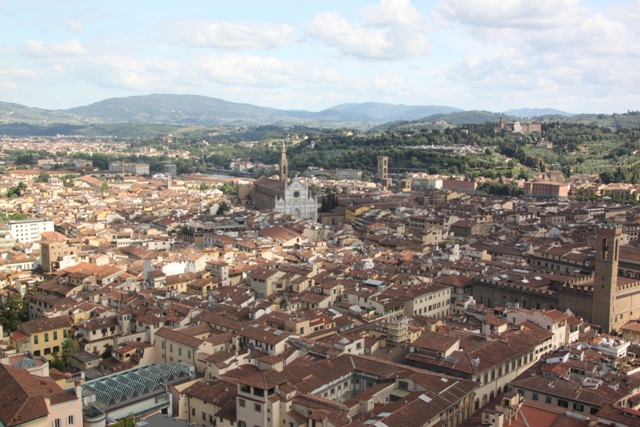 It was pretty crowded, needless to say they don’t chase you down once you make it up there. You can stay as long as you like, which for us with Son was not as long as I would have liked! We did find a spot to sit down and take in the views for 10 minutes or so, before he was keen to get going and we had braced ourselves for the descent.

Going up is hard work, going down is no picnic either. All those spirals and a bad case of aching knees this time, but a highlight for me was the great view of the fresco on the ceiling close up in the viewing area. It is stunning – Dante with the Divine Comedy, Adam and Eve atop a wedding cake and much more. Having looked at the ceiling from below where the figures were tiny, now up on the ceiling level they are massive and you get a sudden realisation of how high up you are. 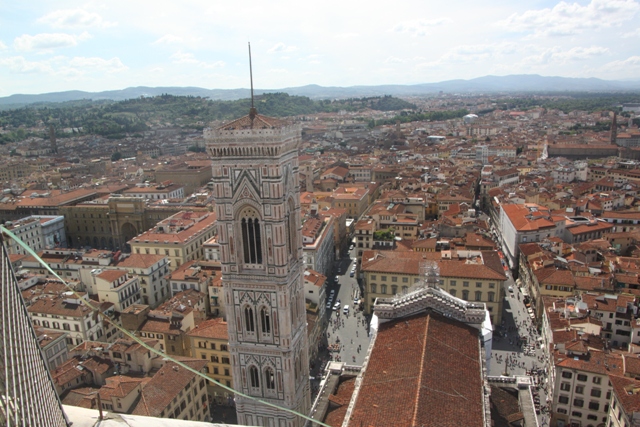 We made it to the bottom in one piece. Husband and I with trembling legs and a sense of achievement, Son barely ruffled and still fun of beans ready for the next thing. I am glad we climbed to the top, it is a Florence must-do, this is definitely a dome with a view.